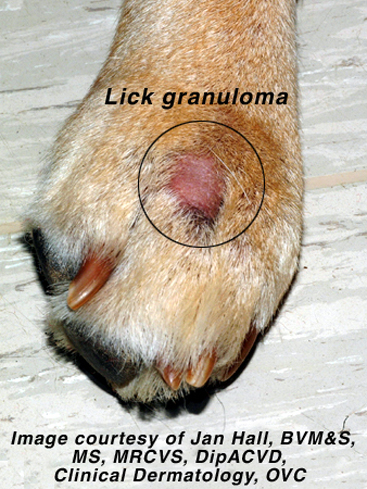 What is a lick granuloma?

Other names include Acral lick dermatitis, and Acropruritic nodule etc. The problem starts with an area of hair loss and reddened skin due to licking. Although usually affecting the lower parts of the forelimbs, hindlimbs can also be affected. On the forelimbs the most common site is the wrist or carpus and on the rear legs areas around the hock or metatarsal area. Initially it looks like “hot-spot” eczema. Due to chewing and licking erosion occurs and the lesion becomes well demarcated from the normal skin. Once ulcerated the condition becomes self-perpetuating and chronic due to the dog’s interference. As healing occurs the dog appears more attracted to the site.

Is there any breed disposition?

The condition occurs mainly in medium to large breeds, particularly Dobermans, Great Danes, Labradors, Retrievers and Irish Setters. Any breed can be susceptible including mixed breeds.

What is the cause?

The cause is not definitely understood. Behavioural or psychological factors have been suggested. Stress or boredom can initiate the condition. Nerve pain may play a part as may joint pain, since lesions often occur overlying joints such as the wrist or hock (carpus and tarsus). Once the lesion becomes chronic deep bacterial infection (deep pyoderma) also plays a part.

How is it diagnosed?

The site and appearance of the lesion is a major guide to diagnosis. Skin biopsies are often taken if (a) there is no response to treatment and (b) to rule out other causes such as mange. If there is the possibility of arthritis in the underlying joint radiographs may be taken.

What is the treatment?

High doses of broad spectrum antibiotics are often used for long periods, particularly if deep pyoderma is evident. Prevention of licking by the use of bandages or an Elizabethan collar is also important. Steroids (and antibiotics) injected directly into the lesion sometimes brings about a good response, as does behaviour therapy and ‘mood modifying’ medication in some dogs.

The condition is complex and therefore treatment is sometimes made on a trial and error basis and tailored to the particular dog. If, with the use of bandages and collar restraint, self-mutilation can be prevented, the condition often responds spontaneously as also occurs if attention is given to the dog’s environment, ensuring that boredom is minimized as much as possible.

© Copyright 2016 LifeLearn Inc. Used and/or modified with permission under license.