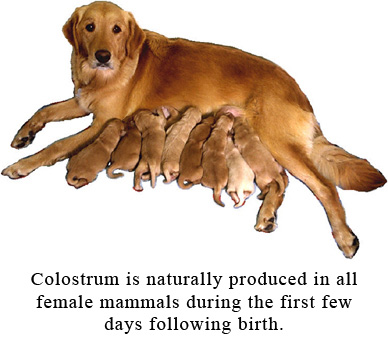 Colostrum is the antibody-rich milk produced from the mother’s mammary glands during the first few days of life. It contains a thousands of antibodies (immunoglobulins), lactoferrin, growth hormone, growth factors, white blood cells, enzymes, vitamins and substances that regulate the body’s immune response. It helps young animals and babies during their vulnerable first stages of life by protecting them against infections and is absorbed intact for the first few days after birth. Once this ability to absorb colostrum is lost, it is still capable of exerting a local effect on body surfaces such as the gut when ingested, or skin and mouth when it is applied topically.

Although colostrum has been a popular supplement since the 1990s it has had a long history of use, in India it has been used for thousands of years in human medicine, and elsewhere it was used for infections before the discovery of penicillin and sulphur antibiotics. Colostrum was also used to treat rheumatoid arthritis in people and was given to children who were vulnerable to polio.

Many holistic vets anecdotally report positive results with both colostrum and one of its components, lactoferrin. Lactoferrin is a protein found in white blood cells that binds up iron so it cannot be used by bacteria and fungi. It is also found in many other bodily secretions, including milk and colostrum.

Why recommend administration of colostrum to my pet?

Colostrum is presently used to treat a variety of diseases and disorders. In pets, colostrum has been recommended and anecdotally found useful for accelerating the healing of wounds such as insect bites, abscesses, ruptured cysts, warts, and surgical incisions. When taken internally, colostrum has been shown to aid in the proper function of the intestinal tract, reducing the severity of inflammatory bowel disease symptoms such as vomiting, diarrhoea, and constipation.

"Colostrum is presently used to treat a variety of diseases and disorders."

It appears to ease food intolerances or allergies, autoimmune disease, heart disease, cancer, gingivitis and osteoarthritis. Research evidence also suggests colostrum is effective in stimulating the immune system and as an antimicrobial against bacteria, fungi, and viruses.

How much experience is there with the use of colostrum in pets?

Colostrum has been used for many years as part of the therapy for people and pets with a variety of illnesses. Controlled studies in pets are lacking.

What species of animals are being treated regularly with colostrum?

Any animal species may benefit from colostrum.

How much research has been conducted on this supplement?

Abundant laboratory research exists concerning the potential benefits of colostrum and lactoferrin in the management and prevention of infections and inflammatory bowel disorders.

How can my pet benefit from colostrum?

Any sick pet may benefit from supplementation with colostrums as part of their treatment.

How successful is colostrum?

Studies in people are contradictory with many studies showing benefit and others showing none. Anecdotally, many owners feel that their pets have improved when colostrum is given. Since colostrum and similar supplements appear to be extremely safe, using colostrum as part of the therapy for pets with gastrointestinal mucosal illness is much more likely to be beneficial than harmful. 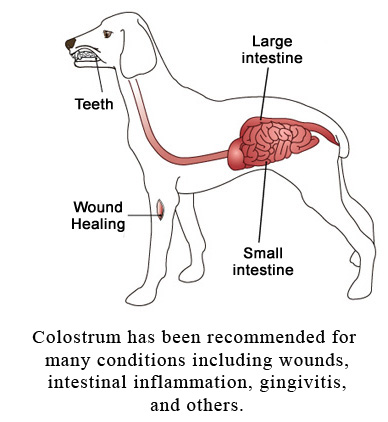 How safe is colostrum?

Most commercial colostrum preparations come from cows. Bovine (cow) colostrum can be transferred to all other mammals.

Animals with allergies to milk should avoid this product.

Ideally, colostrum should come from a source that does not use hormones, pesticides, or medications that might concentrate in the colostrum.

Colostrum does not seem to cause any significant side effect and has been used safely in many pets.

No significant drug interactions between colostrum and standard medications have been reported.

Where do I get colostrum and do I need a prescription?

A simple way of supplementing with colostrum is using commercial products available on line and through health stores; quality does vary so ask us about our preferred brands. In general powdered forms are recommended as preferable to liquids or tablets, due to less processing and longer shelf life.

If you would like to try using Colostrum products with your pet, please talk to one of the vets. We would be happy to advise. A prescription is not required.